A glimmer of light on global growth

Last year was disappointing for global economic growth. Having started the year expecting 3.7% global growth, an estimated outturn closer to 3% is now likely, with the World Bank becoming the latest in a long list of institutions to reduce its growth estimate last week. Despite this now familiar move, there have been some glimmers of light emerging in the short-term trends in some of the larger economies at the start of 2020. This is even before the benefits of reduced trade tension have fed through.

Manufacturing is still acting as a drag on most developed economies, but sentiment indices are up on the lows hit a few months ago and industrial production enjoyed a modestly better performance in Germany and China (the two underperformers for most of 2019) in November. Too early to call a trend but encouraging, nonetheless.

Services activity continues to be the primary growth driver and enjoyed a bounce in both the US and the euro area, hitting four-month highs in December.

Looking forward, the OECD leading indicator series, which aims to pick up economic turning points six to nine months ahead of time, suggests that the major economies are moving towards the recovery quadrant. The chart below suggests that growth is below potential in all the major economies, but momentum is improving (as measured by the X-axis). China is leading this improvement, reflecting the reflating policies introduced in 2019. However, the US and euro area may soon move to that recovery stage, helped by easier policy in both regions.

Fears that surfaced about the impending risk of recession triggered by the inversion of the US yield curve last August have now passed, with a coordinated improvement now seemingly in train. There is life in this expansion yet. 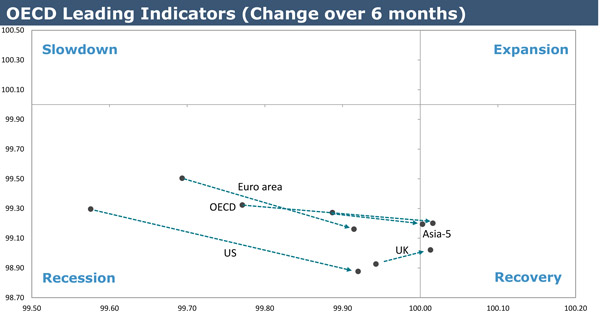