The hammer and the dance

In last month’s Economic Monitor, we noted the signs of a “V-shaped” rebound in the US economy. Better economic data following the April shutdown was a major contributor to the recovery in financial markets. Judging from the latest key economic data, one could certainly argue that this narrative should continue to drive markets forward. However, we have concerns that this momentum may be about to stall due to the recent surge in coronavirus cases in some US states.

The two most important US economic indicators at the start of every month for markets are the payroll report and the services and manufacturing surveys. These have traditionally been used to take the pulse of the US economy and set the stage for markets for the rest of the month. This month’s reports were positive. Payrolls increased by almost 5 million jobs in June, while business activity in services and manufacturing rebounded into expansion territory. While the number of employees is still 15 million less than it was in March, there was undoubted progress in returning people to work, particularly in the leisure and hospitality sector.

That return to work was made possible by the belief that the virus was being successfully suppressed. That is the case in many US states but there has also been a surge in cases in others, with total new cases nationwide rising to a new high of more than 60,000 yesterday. Even though the employment report is relatively recent, the survey refers to the week of 12 June.

Given the speed at which events develop in this pandemic, there is a need for more timely indicators on activity. Mobility indicators such as those illustrated in the chart below provide that evidence. It suggests that the improvement in activity has stalled in recent weeks. 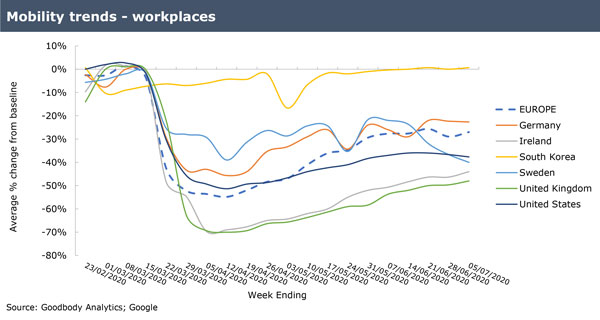 We do not believe that that the recovery will now be stalled completely, but the June payroll report may have been the high water mark for the time being. Another nationwide lockdown – the hammer - is unlikely at this point, with officials likely to implement local ones instead. The dance – trying to avoid a resurgence of the virus as the economy and society reopen – could prove trickier.

The next round of fiscal stimulus

We are moving to the next stage of fiscal support for economies in this pandemic. While the first wave of support centred on healthcare, welfare and wage subsidies, the second phase is about incentivising a return to work, preventing long-term unemployment and assisting industries that have been most affected by the pandemic and social distancing. All these will continue to add to the already significant bill that governments have racked up around the world.

UK chancellor Rishi Sunak unveiled another bold and aggressive policy response yesterday in his Summer Economic Statement that marked the start of the second wave of fiscal stimulus. The package of supports amounted to £30 billion or 1.4% of GDP. This followed on from the package of supports announced in April and takes the total fiscal package to £159 billion, or 8% of UK GDP. An additional £332 billion of support has been made available by way of loan guarantees and business supports. As the chart below shows, the UK has implemented one of the most aggressive fiscal packages in response to this crisis, with the total resources provided amounting to 25% of GDP, coming in behind Germany and Italy.

The US is way out in front in its response to the pandemic, having spent $3 trillion or the equivalent of €8000 per person (see chart below). There has been some speculation that Congress may decide not to press ahead with another round of stimulus due to the strength of the rebound in the labour market. This presents a risk to the US economy as the emergency unemployment support comes to an end this month. However, given the political benefits of these stimulus measures and the imminency of the election, we believe that there will be another package that both extends unemployment benefits for another few months and includes resources for infrastructure development. 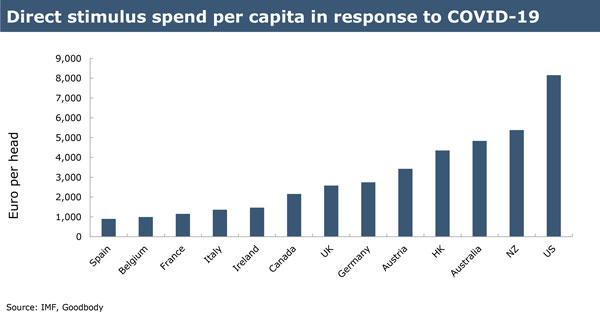