A “Statement on Longer-Run Goals and Monetary Policy Strategy” is not something that often gets the pulses racing. However, investors should take note of the one-page document that was published by the US Federal Reserve on August 27 and the explanation of the move by Fed Chair Jay Powell on the same day. The contents of that document are the result of a long review process and mark a very important shift in the way in which it manages growth and inflation in the world’s largest economy. It also has significant market implications.

To understand the significance of the change, one needs to take a longer-term perspective on how central banks have gone about their business. To tame excessive growth in consumer prices that ravaged the US economy in the early to mid-1970s, Federal Reserve Chairman Paul Volcker took the very unpopular step of hiking short term interest rates to as high as 20% in the early 1980s. While damaging in the short-term, it had the desired effect of curbing runaway inflation and underscored the importance of central bankers in managing the ebbs and flows of the economy.

There have many tweaks over the subsequent decades, but it was Volcker who begun the era of active Central Bank policy to manage the risk of inflation moving above 2%. The 2% inflation target has been instrumental in central bank policymaking globally since then. It has an explicit part of the European Central Bank’s mandate since its foundation in 1999.

That 1980s move marked the beginning of a 40-year period in which central banks would actively raise interest rates if there were signs that the economy was running hot. This was usually associated with the labour market being close to “full employment”, a figure that itself is unobservable and changes over time in any case. The goal of low inflation was ultimately achieved, but the opposite problem of too-low inflation, especially since the global financial crisis, has triggered this subtle policy shift.

The Fed has not changed its mandate. It will still attempt to promote price stability and foster maximum employment, but it has given itself added leeway to achieve these goals in two ways. Firstly, it has broadened the range of indicators it focuses on when assessing whether the labour market is indicating that broader inflation may soon appear. Very low unemployment rates in future may not necessarily mean that the Fed must immediately raise interest rates.

Secondly, it has given itself flexibility on achieving its inflation goal of 2%. It now explicitly states that “following periods when inflation has been running persistently below 2%, appropriate monetary policy will likely aim to achieve inflation moderately above 2% for some time”. In plain English, this implies that given that it has been unable to achieve its inflation target for more than a decade, it would allow a period of higher inflation in the coming years.

To illustrate the point, have a look at the chart below, which tracks the level of prices since the GFC. The 45-degree line is the level of prices if inflation were to run consistently at 2% per annum. Over the time frame analysed the level of prices would have been five percentage points higher at this point. That is the potential level of catch-up that is required. The Fed will not condone runaway inflation, but it will allow it to overshoot “moderately”. If we take this to mean 2.5%, the scenario analysis below shows that it would take over a decade to make up the lost ground of recent years. 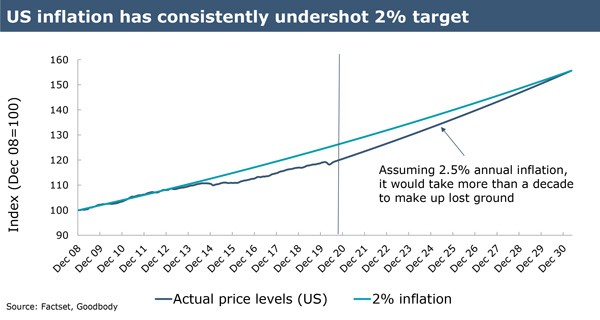 Why should we or markets care about these developments? In the short-term we probably should not overstate the significance; it was well-known that a strategy review was in train and there was an expectation that a move such as this would be announced.

In a longer-term perspective, this has important market implications. Allowing higher inflation means that real interest rates (interest rates adjusted for inflation) can move lower, spurring the economic recovery. It also means that shorter-term interest rates can stay lower for longer. This spurs growth but also reduces the rate at which investors discount future income flows, meaning it can pay more for assets now. The next economic cycle may be a longer one due to the absence of premature tighter policy. With this potential looser monetary policy, weakness in the dollar may also be a longer-lasting feature.

Other central banks, most notably the ECB, also face the problem of dealing with low inflation and limits to what more can be done to promote growth and inflation. The Fed’s latest move may mark the beginning of new era in how central banks do their business and influence markets.

While it has now given itself the flexibility to do so, the next challenge will be to achieve that goal of moving inflation higher.