It’s all about the why | Top Down

It’s all about the why
Since the last Top Down the US bond market has taken centre stage. The yield on 10-year US Treasuries has risen by about 0.5% to 1.75% during that period and is up 0.85% since the start of the year. Yield levels had gone very low, even allowing for interest rates of 0.25% and unlimited quantitative easing, so some rise had to occur. Most forecasters, including us here in Goodbody, expected this to happen. Now that it is happening it is unnerving people somewhat and making them think that ultimately it will undermine equity markets. We would not agree with this. The important consideration is not that bond yields are rising but why they are rising.

It is the driver of bond yields that is important
If bond yields are increasing because growth expectations are improving, then that need not be a problem. I have added two charts below showing the movement in the US 10-year yield and the S&P 500 in the last two cycles,
2003 – 2008 and 2009 – 2019. 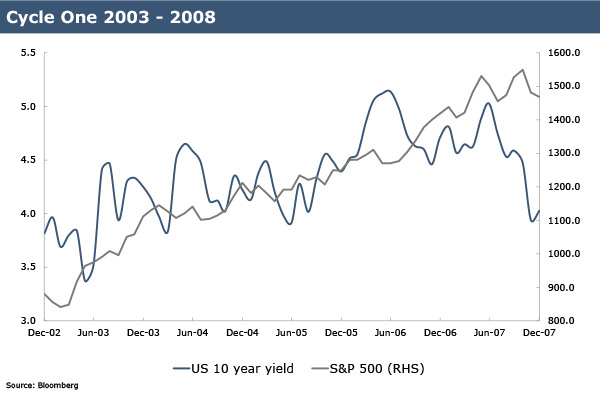 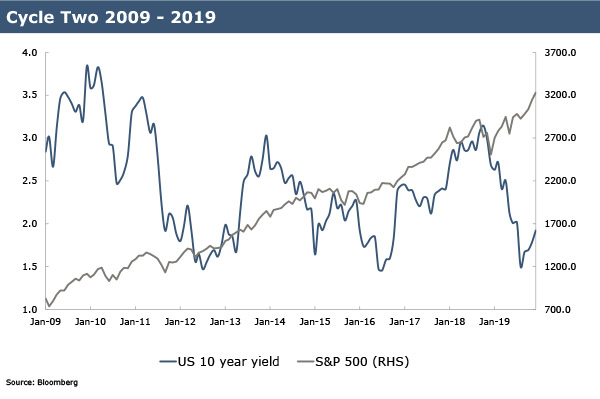 In the first cycle the trend was upwards in the bond yield as the economic recovery took hold and became self-sustaining. However, because the reason behind the higher bond yield was a stronger economy and thus higher profit growth the equity market also trended upwards during that period.

The second cycle, the one that ended last year, was a little bit different. Bond yields were more volatile and trended downwards during the cycle as inflation failed to arrive and indeed declined during the period. If we look at periods of rising or falling during that cycle, equity markets were more inclined to move in the same direction as the bond yield, i.e. rise when the bond yield  was rising  and fall when it fell. This happened because the bond yield was responding to growth expectations.

What do we expected in this cycle?
Summing it up quickly, a mix of the last two. Bond yields are likely to trend up in this cycle, some of this is due to the very low starting point but also the expected stronger economic growth as a result of the amount of fiscal support that is being added on this occasion. We believe that equity markets will follow that trend upwards. It will be similar to the last cycle in that there are likely to be occasions when confidence in economic growth falters pulling the bond yield down and with it the equity market.

What is a bad increase in bond yields?
Of course, there could be worrying developments that are driving those bond yields higher. Firstly, it could be a lack of liquidity in the fixed income markets. That is very unlikely given the amount of purchasing central banks are doing and will continue to do for this year. The second reason could be rising inflation prompting central banks to tighten policy. But the Fed has already said that it will want to see a sustained increase in inflation above its target level. We would probably need core inflation to average 1% higher than its current level for the next 12 months to get the Fed to act in a year’s time. That looks highly unlikely.

What are we doing?
We believe that the current rise in bond yields is down to a combination of a low starting point and a stronger economic outlook. History tells us that is a good mix for equity markets, so we are overweight equities. Much of the pain in the fixed income markets has been in the US. While the 10-year government yield has risen 0.85% in the US it is less than 0.3% higher in the euro area and the US now offers an attractive yield pick-up. It gives us an opportunity to add safe haven asset to our clients’ portfolios with a positive yield. The next thing we will be looking at is the cyclical exposure within our client’s equity portfolios. Cyclical sectors do particularly well when bond yields are rising, again due to that greater confidence in growth. Any sign that the bond market is stabilising is a signal to tone down your cyclical exposure.