Worried? Always, but not enough to change our minds | Top Down

There are two major concerns we hear from clients at the moment. Firstly, is ‘the inflation genie out of the bottle’ and secondly, have equity market valuations become too extended. We do not see problems coming from either of these areas. We believe that we will have elevated inflation readings for a few months as the reopening puts further pressure on supply chains and as we lap the extremely weak pricing environment we had twelve months ago. Secondly, the move in equity markets is being driven by the strong profit growth which we are seeing. The historic valuation may be high but factor in expected profit growth over the next couple of years and the valuation does not look demanding.

Last month we spoke about increasing inflation concerns and since then we have had another month of data released and it is telling the same story. The US is the main region where we see the inflationary pressure but much of it is still coming from areas where you would expect to see prices moving up as the economy re-opens: travel, lodging and unusual ones such as second-hand car prices. The non-Farm Payrolls also repeated the pattern we saw in the previous month, job creation is below expectations but due to lower-than-expected supply rather than lack of demand.

So, you could say that the data should make us less confident about our outlook but that is not so. We did not expect to see the inflationary pressure disappear after one reading, we knew it would be with us for a number of months. There are a couple of things that gives us encouragement. Firstly, on a month-on-month basis the rate of change in inflation decelerated. It picked up but it did not gain further momentum in May. Secondly, the bond market, which is usually the great inflation watcher, has strengthened in the last month. If there was truly some deterioration in the inflation outlook this would have not have happened. The bond market seems more confident that the inflation pressures are transitory.

There are some things to bear in mind when we think about inflation. We spent a decade after the great financial crisis worried about the potential of slipping into a deflationary environment, i.e. an average inflation that was too low. Signs that we are leaving that period behind us would be good for the growth potential of the global economy so we should not get overly concerned if we see the potential inflation rate being lifted by 1% or so. Only if it looks like it could be significantly higher than this that it becomes a worry.

Secondly, the spectre of rising inflation undermines financial markets, and equity markets in particular, only if it spurs a response from central banks. They bring in tight monetary policy that brings the economic expansion to an end. However, in the US, the Fed has made it clear it wants to see inflation above target on a sustained basis before it moves from its accommodative stance. That still appears some way off.

Valuation is in the ‘eye of the beholder’

On an historic basis we are still dealing with the impact of the recession. So, if we look at the historic multiple it will include six months of the recessionary period in global profitability. As a consequence, it is going to look high as it includes a period of depressed earnings and begins to discount the future recovery in earnings. This is the point we are at now. The historic multiple includes a period of distressed earnings and some of the recovery in those earnings. If we look at the multiple based on the full 2021 earnings the multiple is not that far above the long run average and if we use 2022 earnings then the multiple drops to average (see chart below). Yes, equity markets have performed very strongly, but they are just reacting to the power of the earnings recovery. 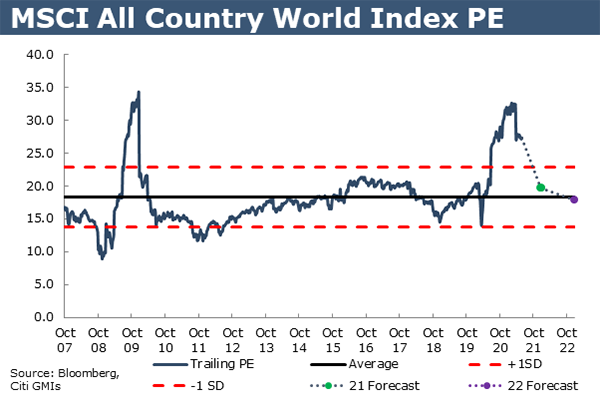 And it is not over

As we said above much of the move in equity markets can be attributed to the earnings progression, They dropped sharply in March 2020 as earnings collapsed due to a closing economy and recovered rapidly as earnings did not fall as much as feared and have recovered quicker than people expected. That earnings momentum is still with us. Earnings forecasts are still being increased on a monthly basis. At this stage the consensus forecast for global earnings is 17% above where it was at the start of the year. Hence the 11% move in equity markets year-to-date does not seem unreasonable. If positive momentum is maintained then there is further upside in equity markets despite what look like high historic valuations.

So, there are always things to worry about when we consider what we do with our clients’ funds and we are continually monitoring them. As we expected there has been a spike in inflation and from what we have seen thus far suggests that it will be transitory. It is not causing central banks to change course and that is an important consideration when thinking about the outlook for markets. Meanwhile equity markets can follow the path of very strong earnings with valuation levels moving towards neutral levels. Currently we do not see anything that would cause us to change strategy.