Last week, Russian President Vladimir Putin launched an invasion of Ukraine by land, sea and air – the biggest attack by one state against another in Europe since World War Two.

As developments continue to unfold, we examine what history tells us about geopolitical events and what the invasion of Ukraine means for financial markets in this week’s Market Pulse.

Impact of past invasions

Chart of the week: Euro area economic sentiment is strong 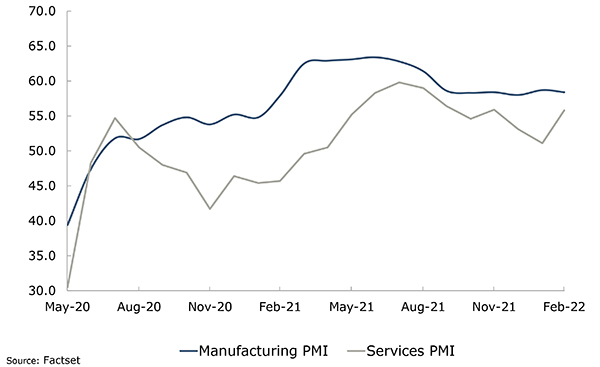 While we look at events unfold in the Ukraine and think about the potential implications, we did get reassuring data on the euro area economy. We know that there was a decline in activity as the Omicron variant led to a drop in mobility, but we believed this would be temporary and short lived. The sentiment indicators for the euro area in January released last week support that view with a strong rebound in the Services Purchasing Managers’ Index (PMI) which cover the industries impacted by the reduction in mobility. It is important to see the euro area economy in strong condition as it faces the fallout from the invasion of Ukraine.

Market Pulse: Does January set the tone for 2022?

Market Pulse: A shift towards cyclicals